In one of his first CrossFit workouts, Chad Hancock tried to best Rich Froning.

He’d seen a video of the legendary CrossFit Games champion do heavy Fran—(15-12-9 reps of 135-lb. thrusters and 45-lb. weighted pull-ups)—in just over 5 minutes and thought, “I could do that.”

Chad went out to his garage gym to give it a shot. 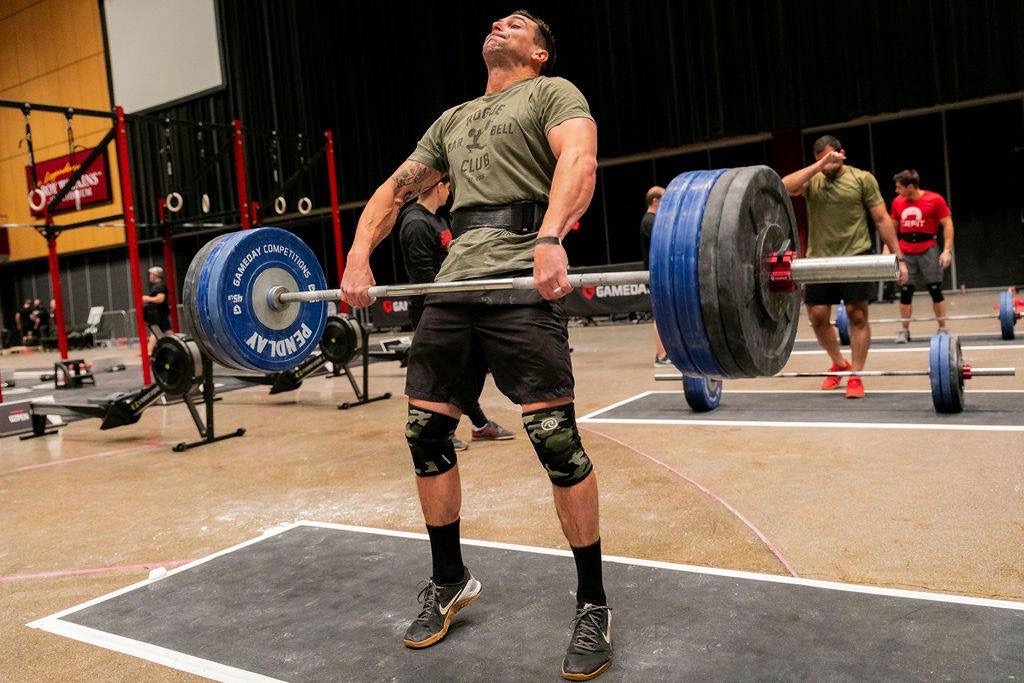 “It probably took me 35 minutes to get through; I thought I was gonna die,” he said. “I just loved the challenge.”

At the time, Chad was an endurance athlete—and a damn good one, too. He’d spent more than 10 years traveling the country to do triathlons and long-distance mountain biking, competing in the elite waves and finishing on the podium more than once. 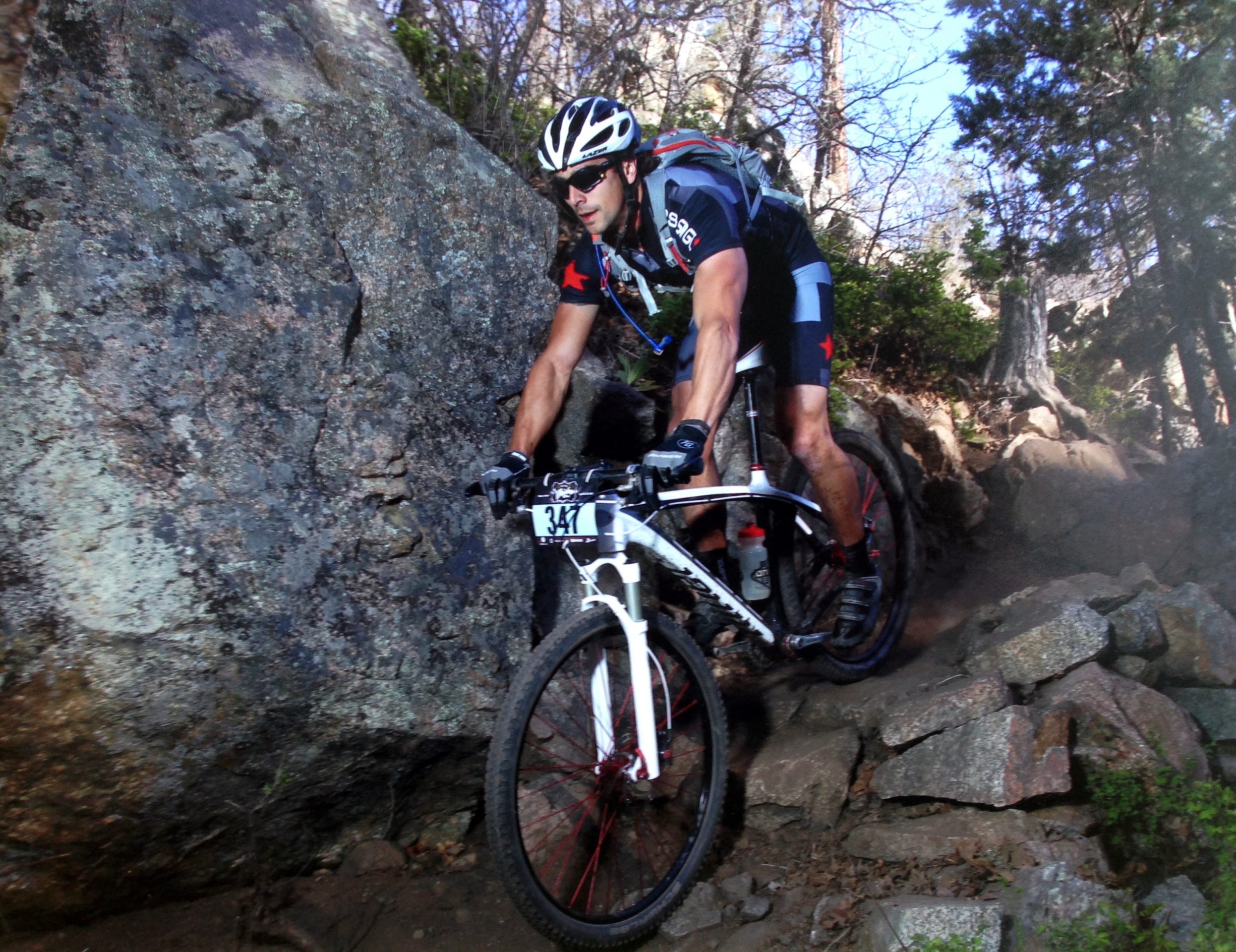 He loved it, but when he started building a family—today, Chad and his wife have four kids aged 5 months to 9 years—he just didn’t have the 15 hours per week endurance training required.

So he started CrossFit.

What began as a fun way to get in a good workout in a short period of time quickly became Chad’s next competitive passion.

“It’s a super humbling sport as far as how many great people there are, so no matter how good you are at something, there’s always people that are better—way better—that you can learn from,” he said. 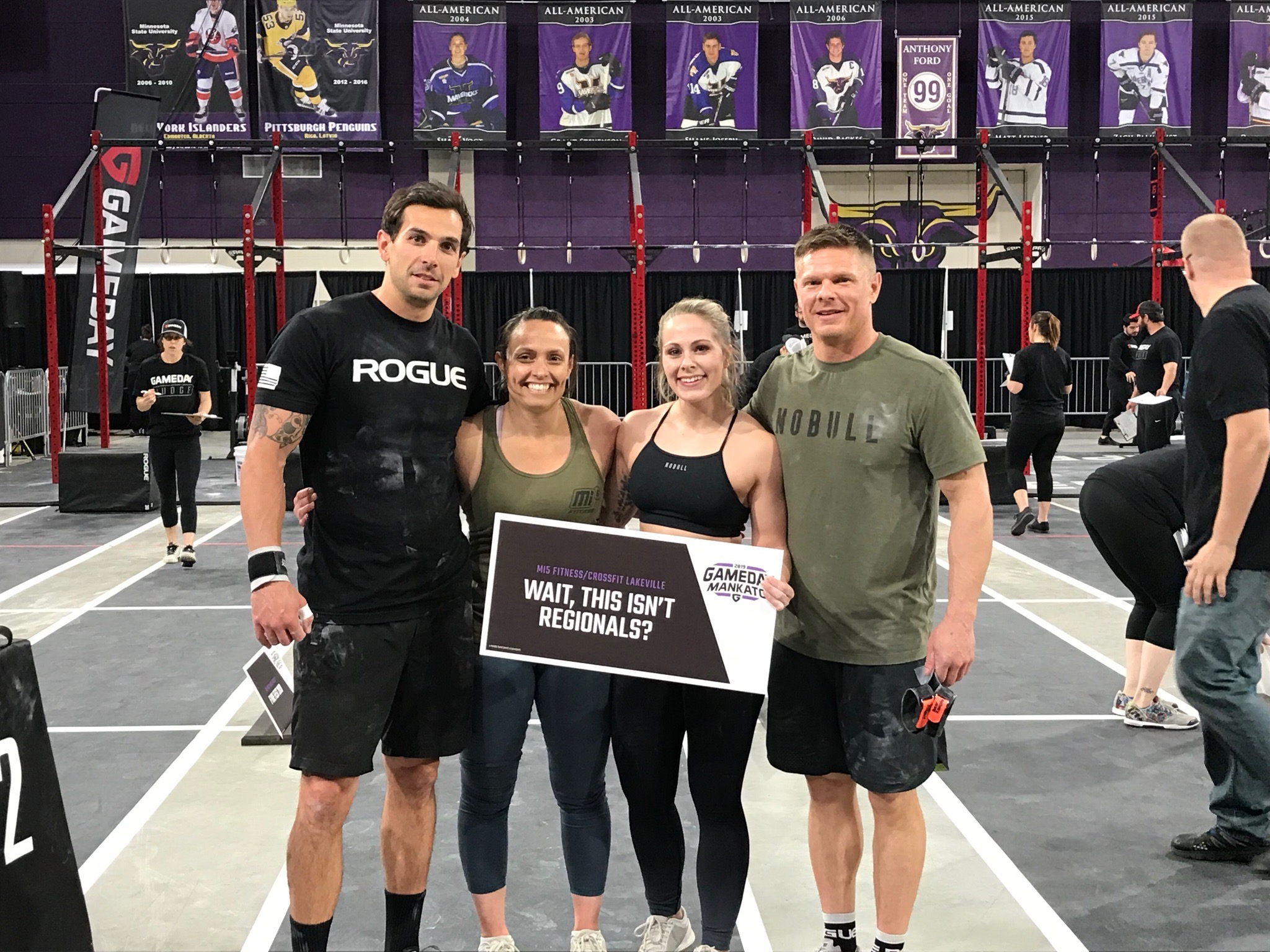 CrossFit also afforded so many new skills to learn and opportunities to improve, whereas in endurance sports, progress appeared in the form of mere seconds from race to race.

“I knew the group I was racing with, I knew who would beat me and I knew who I would beat, and when you do that 30 times a year, it’s boring,” he said. “Versus the workouts that we do at the gym, I don’t know (what’s going to happen). I’m not gonna beat everybody!”

Chad loves competition, but not just for bragging rights. For him, training and competing in the gym is preparation for excelling in every area of life.

He begins every day with a personal mantra: “Test the human spirit.” 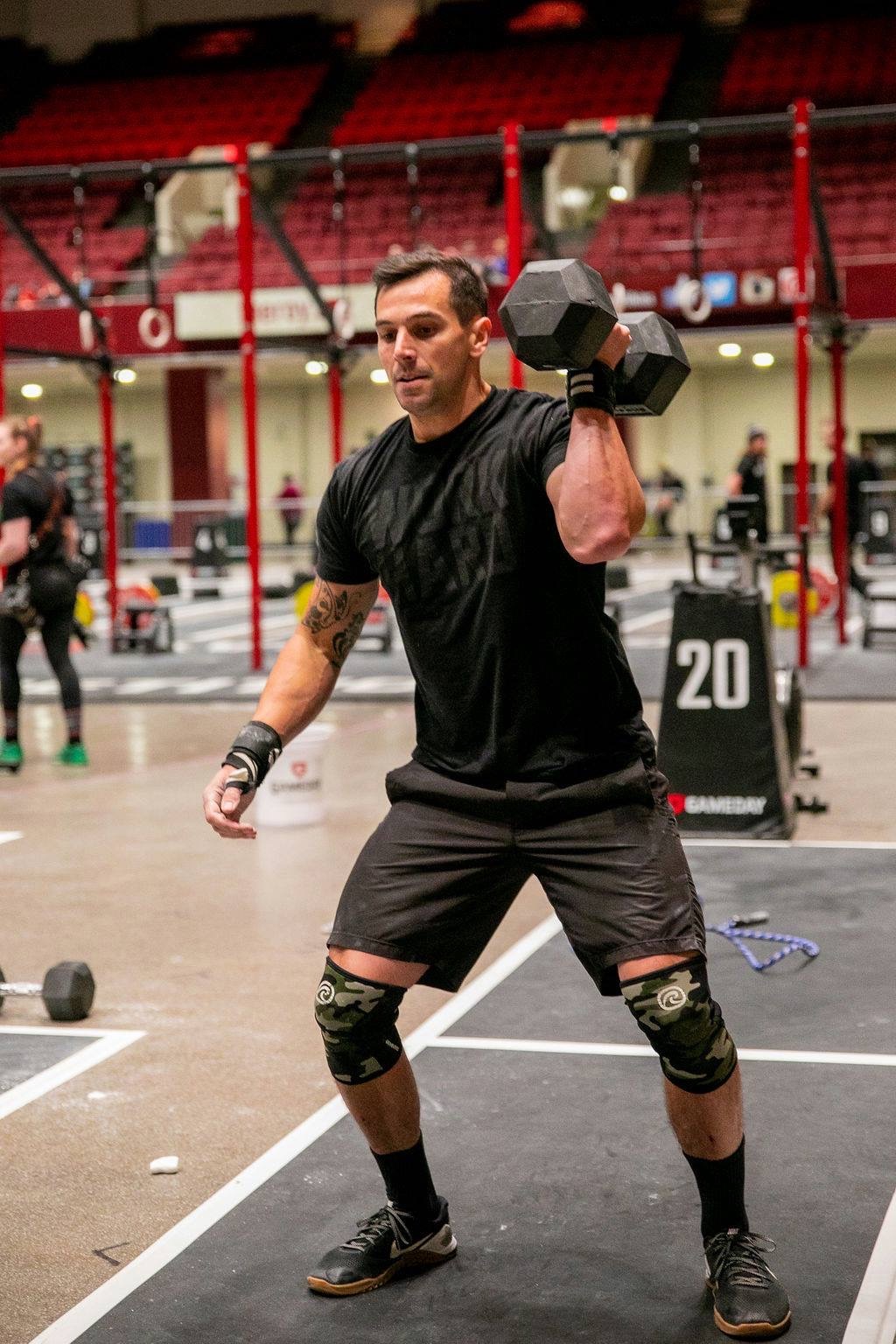 “It kind of drives me always to understand that there’s a point of measure and there’s something that I am capable of beyond what I’ve experienced,” he explained. “There’s a huge rush when you realize that you really kind of pushed beyond what you thought you were capable of. It’s an organic, personal payoff, and the feeling kind of really uplifts the entire day.”

It’s an attitude that permeates every aspect of his life—his career in the competitive world of venture capitalism as well as being a husband and father of four. Where others with similarly demanding lives and careers might make excuses, Chad prioritizes his health above all.

“I honestly think it’s all related,” he said. “If you work really hard in fitness, it spills over.”

Facing a challenging project at work is not so different from taking on a tough workout, he said. And the same goes for raising a family.

“Because family’s really hard sometimes. Sometimes you have to grit your teeth and go through the 2.5 mins of Fran with four kids.”

He described driving his youngest around the neighborhood in a snowstorm at 1 a.m., trying to get him to fall asleep. 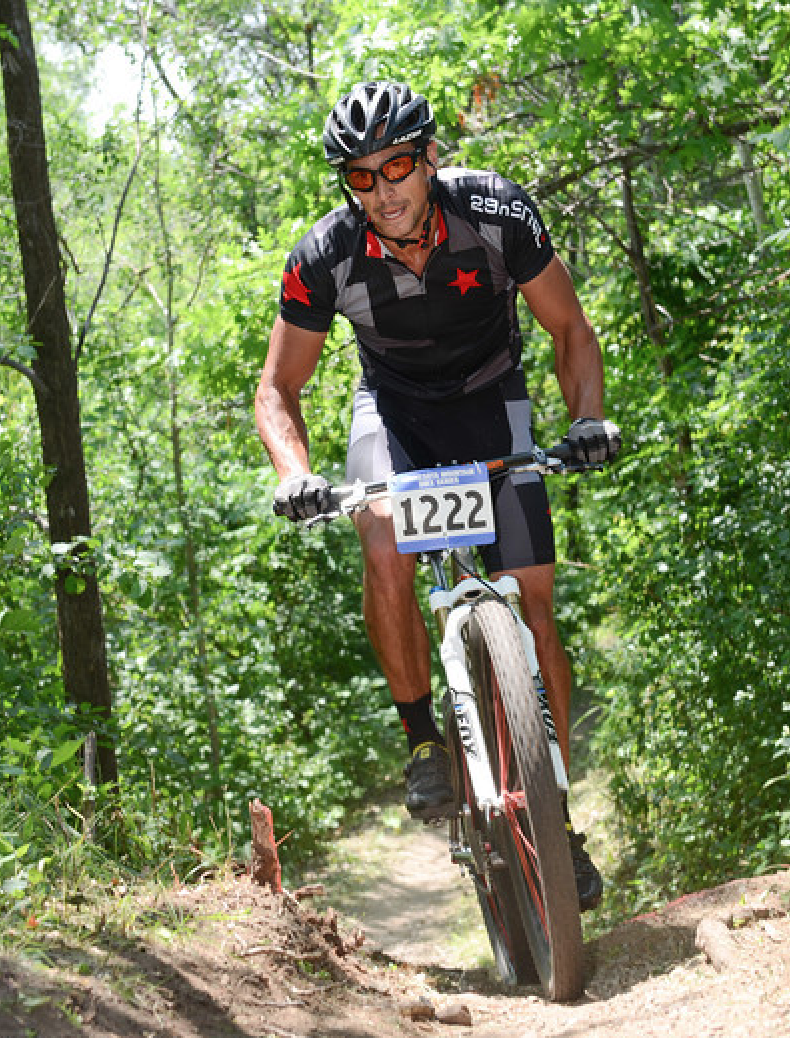 Plus, he’s seen firsthand the consequences of neglecting health.

“My dad, for example,” Chad began. “He’s 68, but you would think he was in his 80s as far as how you hear him breathing. I work out with other people his age, and it’s a completely different tone that they set. There’s way more energy in them, they don’t get tired at the top of stairs, and they’re doing the workouts that we’re all doing.”

For that reason, Chad and his wife have made fitness a huge part of their children’s lives, converting their basement into a hybrid gymnastics and CrossFit gym, complete with a rig, boxes, rower, tumbling mats, balance beams, mini trampoline and parallel bars.

“After the fourth time that somebody jumped off the couch and hit the coffee table, we just started selling that furniture that I had before all the children,” he said, laughing.

After Chad finishes a workout in his half of the basement gym, he might help his daughter with her balance-beam routine or coach his son through a series of obstacles.

The key is teaching his children that fitness is about fun, not suffering. Whereas in traditional sports there’s always a clear winner and loser, “in this environment, as long as you are personally improving, it feels like a huge victory,” Chad said.

He described a conversation with his 9-year-old son about the merits of eating an extra-large bag of Skittles—a prize earned for good deeds done at school—after dinner.

“I was like, ‘Yeah, you can have it, but how much do you want to have? How do you want to feel after?’” Chad said. “He’s like, ‘I want to feel good after.’ He took the bag and took a third of it and didn’t even look at the rest of the bag. So it’s cool seeing him make those decisions.”

With a full-time job and four little ones in tow, Chad doesn’t have much time left over for racing. But his performance in the races he has done since starting CrossFit have improved, despite a lack of endurance-specific training.

“I think just because I could hit those higher percentages of output during a race and feel OK,” he said, comparing the approximate 85 percent output of most endurance training to the 95-100 percent output of a CrossFit workout.

His deadlift has also increased from an iffy 315 lb.—“it would look like my spine was gonna shoot out my back”—to a pristinely lifted 500 lb. He can also touch his toes now, something that he never thought would be possible in his endurance days.

But the best part, Chad said, is that he’s nowhere near the top of his game yet—and that means there’s plenty left to accomplish, in and outside the gym.

“Test the human spirit,” he said. “Because it’s there and it wants to be tested.”