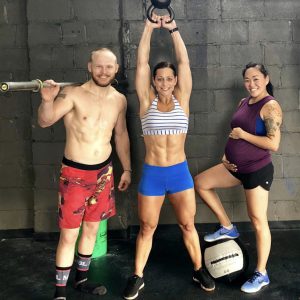 A couple months ago, Holly Blake ran a mile without stopping.

“That was the first time in a long time that the mile felt really good,” she said. “I didn’t have to take a break, I didn’t feel like I had to walk at all.”

She’s also been a member of CrossFit St. Paul for almost seven years, and she says doing CrossFit has been great for both pregnancy and motherhood.

“It’s for sure something that’s been really good for everybody in the family,” she said.

Holly and her husband, Anthony, started CrossFit in the summer of 2012. At the time, they’d been living with CrossFit Minneapolis/St. Paul members Ryan and Molly Lake, who encouraged them to give it a try.

“We were like, ‘You guys come home sore and like you’re gonna throw up—no thanks,’” Holly recalled, laughing.

But in reality, Holly and Anthony were tired of the globo gym.

“We didn’t know what to do when we were there,” she said of their previous attempts to get fit. “We’d just putz around on the treadmill; it was just dumb.”

So they gave in and gave CrossFit a shot.

“It was great,” Holly said. “Right away our bodies felt challenged, and you could just tell that it was gonna be a different workout regimen than we’d ever done before. We really liked it.”

Six months later, Holly became pregnant with their first child, Aela. While some CrossFit critics question training while expecting, Holly knew the gym was exactly where she needed to be.

“I think what was really good is we got probably in the best shape of our lives right before I got pregnant,” she said.

She consulted her midwife.

And that’s exactly what she did.

If the weight felt heavy, she lightened the load, and as her belly grew, she modified movements appropriately. Box jumps became box step-ups. She stopped going inverted. She did squat thrusts instead of full burpees.

She even did a modified version of the Dirty Thirty.

“I felt good,” she said. “I never felt like I was endangering myself or the baby. … Sometimes I didn’t even (feel) like I was pregnant.”

When it came time to welcome Aela into the world—after 26 hours of labor—Holly was grateful for her increased fitness.

“I definitely chalk up being able to last that long in labor pains to just one super-long CrossFit workout,” she said.

But fitness is a lifelong journey, and it’s not a straight path.

After undergoing a C-section with Aela, Holly was forced to take a hiatus from training. Not long after returning to the gym about a year later, she became pregnant with their second child, Orrin.

As any mother will testify, training while pregnant is all about knowing your body. This time, since it had been several months since she’d done CrossFit, Holly abstained from training during pregnancy.

With two beautiful, healthy children, Holly and Anthony were happy. But they were also tired. Very tired.

“We were stressed, tired—all the things with having a baby,” Holly said. “Everything spiraled. We were eating like crap, and we gained a ton of weight.”

A glance at a family photo album was all the motivation they needed to return to the gym.

“We were like, ‘Whoa, we need to get back into the gym,’” she continued. “And we knew CrossFit was the only thing that would really work for us.”

It wasn’t always easy—physically or mentally. Holly sometimes struggled to lift weights that had once seemed light.

Still, she committed to her fitness, scheduling her three workouts per week into her calendar just like a work meeting.

“I literally put it in my schedule … otherwise it’d be too easy to not go,” she said.

With young children at home, no one would have blamed her if she’d decided to skip the gym. But Holly said setting aside time to work on herself ultimately benefits the whole family.

“I feel like we just have more energy,” she said. “When you’ve got more energy, you’re happier; you’ve got a little bit more patience with your kids, you’re not so tired all the time.”

CrossFit class, she said, is one of the few times she and Anthony get to enjoy some childless activity together. But the kids are still often nearby, watching their parents get fitter while they play in childcare.

“Aela loves it,” Holly said. “She sees me working out, and that’s a big thing for me, for her to see me doing stuff. I think it’s great for her to see I can do it, too, it’s not just Dad who can lift a lot of weight.”

The Blakes now have a third child, Anders, who’s just shy of a year old. Holly continued to CrossFit until the last month of the pregnancy—and if you attend the 11:00-a.m. class today, you just might find her working out alongside you, continuing to prioritize her own fitness for the sake of her family.

“With Anthony, we just thought about our long-term health,” she said. “We want to be there for our kids and be able to play with them and get down on the ground with them and that kind of stuff. We look at it as a long-term thing, and we make time.”