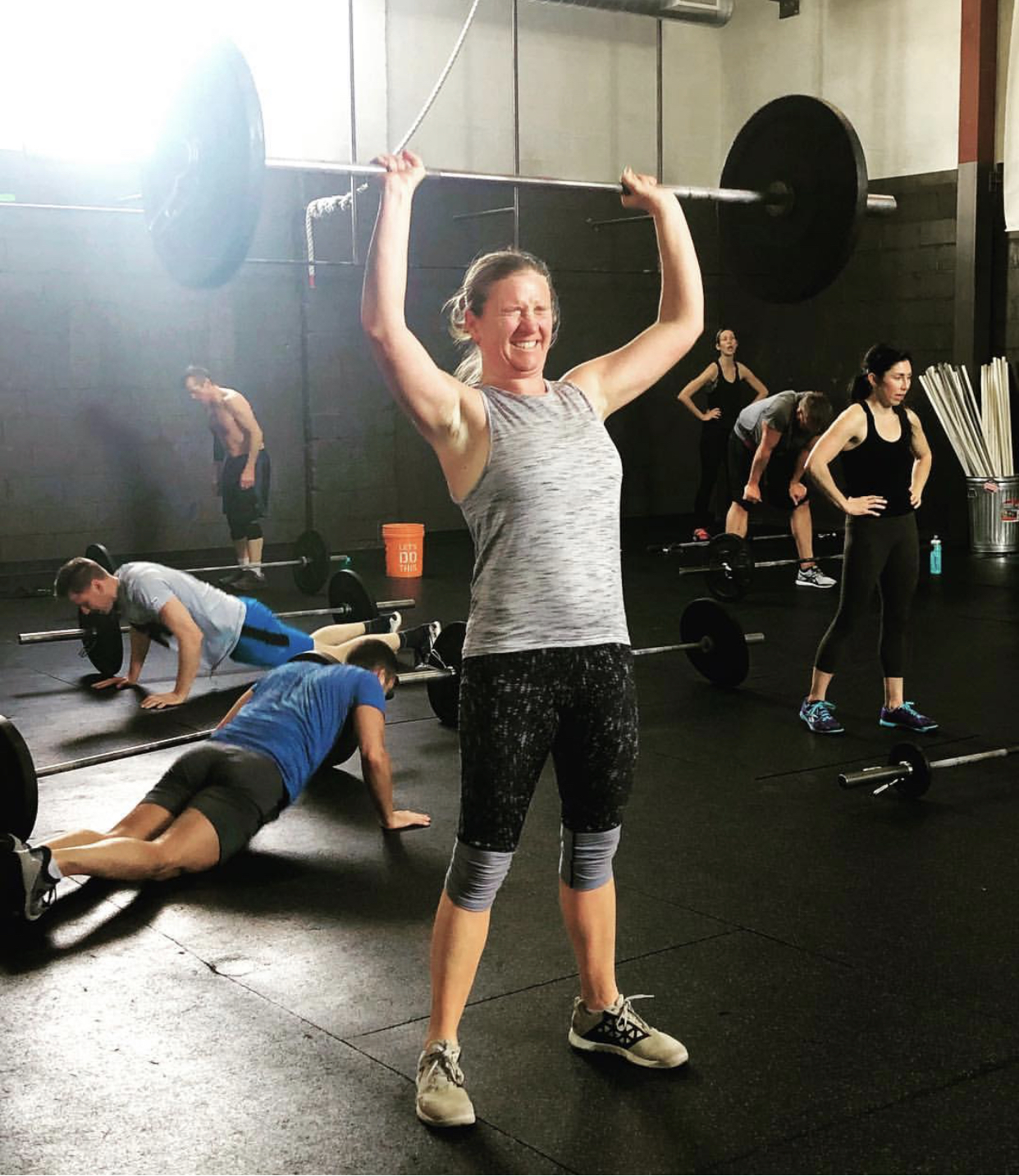 Did you know that our very own Julia Hesse-Moline was Minnesota’s first female collegiate wrestler to get injured on the mat?

Despite the fact that she’d never been athletic while growing up—apart from running and being “squirrely,” she said—she joined the University of Minnesota Morris’ first female wrestling team when she attended in the ‘90s.

“I thought that would be super badass and totally feminist,” she said. “You didn’t have to try out for the team; they were just desperate for anybody. So I did it, and I was terrible. I broke my arm, I was so bad.”

That was the end of Julia’s competitive athletic experience. Until she signed up for the 2019 Reebok CrossFit Games Open.

Though Julia abandoned traditional athletics long ago, she’d always enjoyed working out: Zumba classes at the local YMCA or bench pressing with her best friend.

“Now that I know how to do a bench press, you kind of hang your head, like, ‘What were we doing?’” she said, laughing.

But even while training at the local globo gym, Julia began noticing people get fit. Seriously fit.

“One time I was working out at LA Fitness and there was this woman there, and she was so strong and she was so beautiful and she looked really friendly, and I was like, ‘What are you doing?’ And she was like, ‘I work out at CrossFit St. Paul; you should come and see,’” Julia recalled. “Her encouragement and her friendliness made me feel like maybe I can walk through the door; maybe these people won’t just eat me alive.”

Still, it was nerve-wracking. Weightlifting was intimidating, she said, as was CrossFit’s reputation for being competitive—definitely not Julia’s jam.

But her fears were quickly assuaged after her first on-ramp class by “the initial warmness and how friendly everybody is. … And just seeing people having a good time,” she said.

Even if it was “a couple months before I felt like people were speaking English,” she joked.

Julia’s fitness improved quickly. Back in college, benching 100 lb. was a lifetime achievement; today, she benches 123 and can climb to the top of the 15-foot rope.

“I think I’m a more satisfied athlete,” she said. “I will go for a workout and leave feeling tired and accomplished and my mind is settled, versus going to the Y and going to Zumba and having a lot of fun, but not feeling that sense of fatigue or accomplishment.”

She also hopes to set an example for her two kids, Helena (11) and Axel (8), teaching them that “there’s a million ways to be athletic—you don’t just have to play varsity soccer for that to count.”

Despite her aversion to competition, on Monday, February 25, Julia found herself clutching a medicine ball and facing the wall for the start of Open Workout 19.1: a 15-minute AMRAP of 19 wall-ball shots and a 19-calorie row.

“Danita asked me to; it was peer pressure!” she joked.

But to her surprise, the competition didn’t feel like a competition. Throwing down in open gym alongside a few other buddies from the regular 9-a.m. class felt more like a party, she said.

“I love our gym because of the social piece,” she added. “My goal was to just show up to the party, have some fun with my friends, and then leave feeling better.”

Not only did she do that, but she surprised herself as well. Though she typically opts for the 10-lb. ball in wall-ball workouts, for the Open, she went Rx—and made it through more than five rounds before the time was out.

“Granted, the height is lower, but I was like, ‘OK, maybe I need to start always doing 14. And that’s an improvement.”

A week later, she did more than three rounds of hanging knee raises, single-unders and cleans in Open Workout 19.2. And even if 19.1 was the only workout she’ll be able to do as prescribed this year, she says she’s glad she participated.

“I’m happy to put myself out there now,” she said. “Just to do something different and stretch myself a little bit.”

“I just really love the community and the fun of it,” she added. “Maybe a lot of the world doesn’t think this is fun—writhing on the floor, gasping like a fish out of water because you just worked so hard. I’m like, ‘How can you not think this is fun?’ It’s amazing, it’s such a good time.”