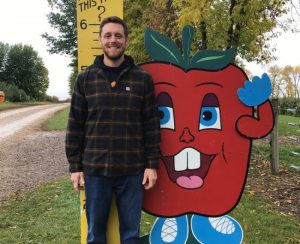 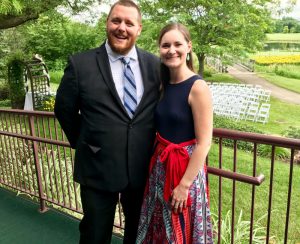 The room was dark; the sun not yet risen. Beads of sweat condensed on his brow as he sat up on the couch, gasping for air while his fiancée, Jenna, slept in their bedroom alone.

The couple often slumbered in separate rooms—not because they’d had a fight but because of Jim’s cacophonous snoring. Still, the noise was preferable to silence.

“She told me sometimes at night she’d put her finger under my nose to make sure I was breathing,” Jim said.

The episodes were likely indicative of sleep apnea, a disorder in which breathing stops and starts throughout the night, increasing risk of hypertension, heart disease and stroke. It’s most commonly caused by obesity.

After yet another restless night—alternatively punctuated with fits of wheezing and sudden stillness—Jenna turned to her fiancé with a sobering message.

“She was like, ‘I don’t want to get married and then you die on me,’” Jim recalled.

Jim was a high school and college athlete. He swam and played football and water polo. But with the end of formal education came the end of his active lifestyle, and over the years the pounds crept on.

Breakfast looked like four pieces of toast, thickly buttered and heavily salted; for lunch, a deluxe value meal from Culvers. Later he might stop at a gas station for some Monster.

“Get a Butterfinger, get a couple of those hot dogs on the little roller and load ‘em up with all the jazz and a big bag of Ruffles, and that was a normal day,” he said.

“Ah, that’s just a number; if I was four inches taller I’d be fine,” Jim told himself.

Still, a part of him knew he needed to make a change. For one, he couldn’t get through a shift at work without a change of clothes.

“I was always sweating,” he said. “I had to bring extra T-shirts to work because I would always sweat.”

He also frequently became dizzy and could barely fit a size XXL shirt—and then there was the matter of his upcoming wedding.

“I didn’t want to look back at wedding pictures and be like, ‘I wish I would have made a change,’” he said.

When Jim joined CrossFit St. Paul in August 2017, he knew he wasn’t in shape. Still, he didn’t expect to need a break after running 200 meters.

“And I was like, ‘OK, that was only a 200, and now you want me to do a bunch of box jumps?’” he recalled thinking during his first workout. He needed to rest after the first two jumps.

Though he was sore for a week, he couldn’t wait to come back.

His weight dropped a little, but not as much as he wanted—most likely due to his post-workout meal of two hot dogs and a bag of chips, followed by an evening quarter-pounder with cheese.

“So doesn’t matter how great your workout is if you’re eating like garbage,” Jim said.

So he spent a day on Google and then stopped eating trash, adopting a mostly Paleo diet of meat and vegetables and cutting out sugar and processed foods.

He felt an immediate surge in energy. He pushed harder in workouts. His weight plummeted while he lifted heavier and heavier weights. Within a month, his sleep-apnea episodes had ceased.

Today, after just over a year of CrossFit and healthy eating, Jim weighs between 189 and 195 lb., with just eight percent body fat. When he first started training, he couldn’t hang on a pull-up bar for more than five seconds; now he can bust out 14 strict pull-ups unbroken. He can string together multiple reps of handstand push-ups and recently performed his first ring muscle-up.

Even more meaningful have been the changes he’s made on the inside.

“I’m overall more confident,” he said. “I was always the biggest guy in the room … so I was always cracking jokes. Oh, it’s Jim, he’s the funny one. … (Now) I don’t have to be that goofy, jolly guy to cover up the fact that I’m insecure; that I can’t do stuff that other people can.”

He credited Jenna—now his wife and a fellow athlete at CrossFit St. Paul—for supporting him as he worked to win back his health.

“Most of the changes are because of how great she is,” he said, adding that she’d helped him quit smoking just a few years previously. “I just feel like we have even more strong of a bond than we had before, because we’re doing CrossFit together.”

And he doesn’t even miss the hot dogs and chips.

“Those things just really don’t get me going anymore,” he said. “It’s weird—once you stop eating the shit, you stop craving the shit.”

“The biggest thing for me was just to have a goal,” he added. “To know why it’s important. I had a big driving factor—I didn’t want to die.”