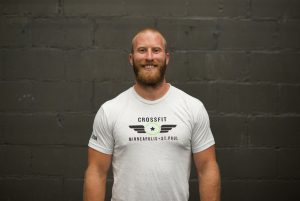 I was introduced to CrossFit during my freshmen year at St. Olaf. A fellow teammate of mine had been doing it post-hockey season at which point Tyler and myself became interested in his training. We would mix in workouts in between our scheduled off-season hockey regimen during the spring of our freshmen year. My first workout was Helen, three rounds of a 400m run, kettle bell swings at 53 pounds, and pull-ups. I did the 400’s on a treadmill, the kettle bell swings with a dumbbell, and the pull ups strict. I don’t remember how long it took me, but I know that I was tired and I beat Tyler. Definitely, BEAT Tyler. We started to take things seriously during our sophomore year as we became bored with our typical circuit training. This continued through our senior year, and eventually Tyler decided that he was going to pursue his passion and open CrossFit Minneapolis upon graduation. I personally spent some time away from a typical CrossFit gym after graduation, but got back into the gym in late 2011. I spent one year coaching On Ramp as a part-time job while working for US Bank, and came on as a full-time employee in January of 2014 and have been working as the General Manager of the St. Paul gym since.

I CrossFit because… I am an extremely competitive person, but more importantly, knowing I wasn’t going to be a professional athlete, needed something to fill that void.

I coach because… I enjoy sharing my knowledge with people and in turn seeing them reach milestones that they never thought they would have been capable of.